Look for more information coming shortly regarding our 2018-2019 season!

Congratulations to Rhonda Garnier, winner of our fabulous door prize of the dinner (or lunch) cruise for 4 with Grand River Cruises, Caledonia.  Enjoy your cruise, Rhonda! Anchors away!

Stage 88 presents its second production of the 2016-2017 season: Separate Beds, a dramatic comedy by MJ Cruise, to be performed at the Gord Paynter Theatre this May.

Ernie (played by Rick Toews) and Twink (Valerie Harrison) are in the autumn of their lives. In celebration of their thirtieth wedding anniversary, the couple’s children send them on a Caribbean cruise. Free of chores and children, Ernie and Twink are wined, dined and introduced to exciting people. When they meet the rich, seductive Blake (James Binkley, with the permission of Canada Actor’s Equity Association) and Beth (Kristen Wilson), who still seem to have the perfect life together after ten years of marriage, Twink becomes infatuated with the glamour of the other couple’s lives and seeks to reignite the spark in her own marriage.

Separate Beds looks at marriage from the inside and out. Between the cabin and the dining room, we get to see conflict in the public and private demonstrations of a relationship. Ernie and Twink teach us about the danger in taking your spouse for granted and Beth and Blake show that a glossy surface may well be hiding a great disconnect. Respect ultimately wins the day and all four characters learn what it takes to make a marriage sizzle.

Director Mindy Forrester quips “I am grateful to Stage 88 for giving me the opportunity to sit on the other side of the table and direct this talented group of actors. Coming to this project from an actor’s perspective, I have, like the characters in the play, discovered that the grass isn’t always greener. Decisions on sets, lighting, costumes, and marketing can be tough for a first-time director, thankfully I have had great support from this company.”

Through partnership with Grand River Cruises (Caledonia, ON,) a spectacular door-prize of a dinner cruise for four will be presented to one of our lucky patrons! Separate Beds will be staged at the Gord Paynter Theatre at North Park Collegiate, 280 North Park Street, Brantford, ON, May 11-13th at 8pm. Tickets are $18 each, available in advance on Stage 88’s website (new site being launched mid-April), or by cash sale from The Brantford Bookworm, 331 Brant Ave., or at the door (cash only).

Stage 88 is a not for profit Brantford-based community theatre company that enriches and entertains by providing superior theatrical experience through creative community involvement.  Stage 88 began the 2016-2017 season with The Most Massive Woman Wins.  Other productions,  On Golden Pond, August: Osage County and Calendar Girls were at the Sanderson Centre.  Stage 88 will kick-off their 2017 season with One Flew Over The Cuckoo’s Nest, presented October 5-7th at the Sanderson Centre. 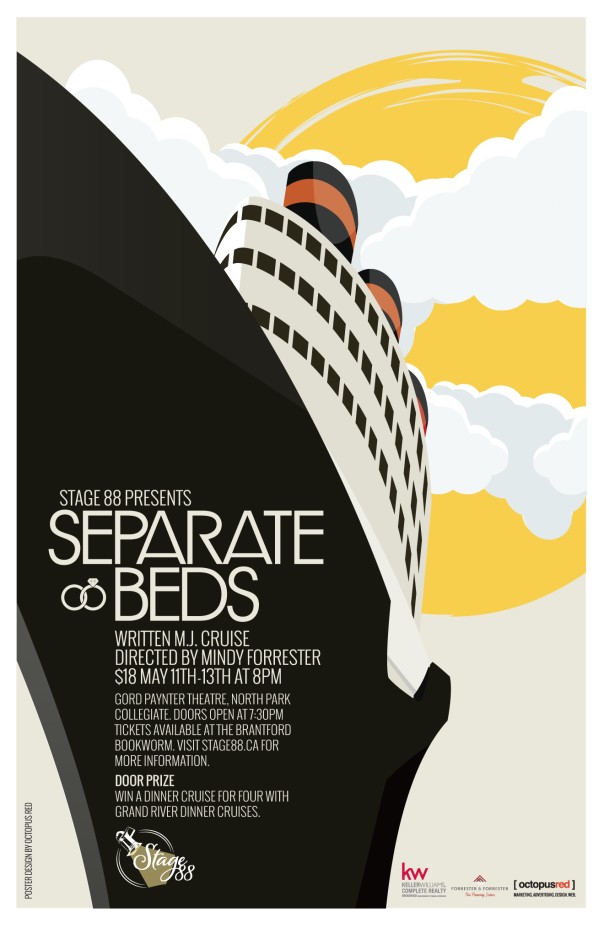 The Most Massive Woman Wins
by Madeleine George

Challenging, brutal and hilarious, four women of various shapes and sizes sitting in the waiting room of a liposuction clinic explore their perceptions of body image. The women reveal their experiences dealing with their weight issues through monologues, short scenes, and even schoolyard rhymes. From painful childhood memories to frustrations with the opposite sex, these experiences both haunt and empower these women as they imagine their way to a new vision of themselves as beautiful and whole.

October 13-15th, 2016 – 8pm at the Gord Paynter Theatre, 280 North Park Street (North Park Collegiate). Tickets are $15 each, available in advance at the Brantford Bookworm 331 Brant Avenue, or at the door. Cash sales only. 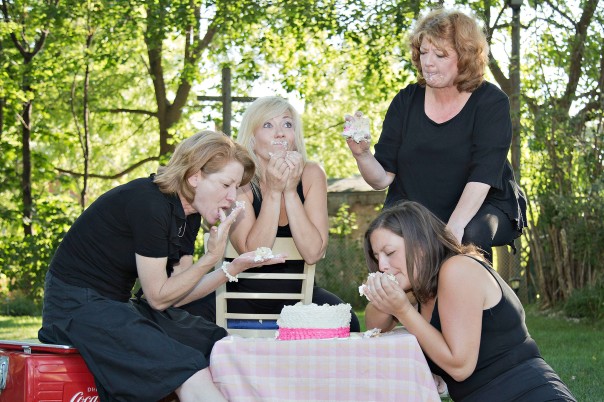 A matinee has been added! That means 3 stellar performances for you to choose from at the gorgeous Sanderson Centre in Brantford . Thursday, February 18th @8pm, Friday, February 19th @8pm or Saturday, February 20th at 2pm…get your tickets online today at: http://www.sandersoncentre.ca Quality live theatre presented to you by the popular Stage 88 crew in the glamorous Sanderson Centre, affordable ticket prices and where else can you park for a BUCK for 14 hours…I know right? grin emoticon Hope to see you there! 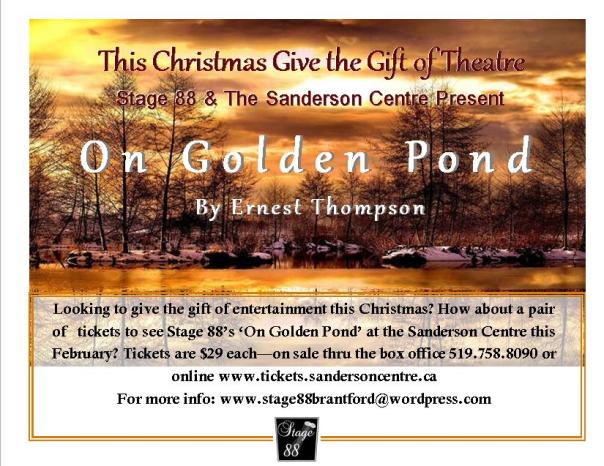 When Allan and Charlotte decide it’s time to retire and sell their land to the neighbour, they find a nice young couple to rent their farmhouse – and unwittingly they become participants in one of the largest successful underground economies – the marijuana growers of Canada.  Based on the true-story of the playwright’s parents, the play has been written for two actors, who play the elderly couple, as well as every other character. As it is with improv, watching the actors take on all the various roles provides as much joy as the unfolding of the story.

Starring Catherine Camp-Paynter and Dennis Curley as EVERYONE! Directed by Linda Lloyd-McKenzie

Tickets: $15 each in advance, $18 each at the door. Advance tickets on sale starting Tuesday September 8th at the Brantford Bookworm, 331 Brant Avenue, Brantford – cash only. Tickets at the door are also cash only. 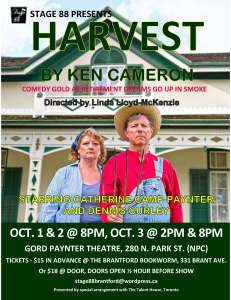 Back by Popular Demand!

June 5th and 6th at 8pm (doors open at 7:30) at the Steve and Helen Kun Performance Theatre: Laurier Brantford Research and Academic Centre RCW002  150 Dalhousie Street Brantford. $18pp Tickets on sale at The Brantford Bookworm and Green Heron Books (Paris) or available at the door. Don’t Miss Out! 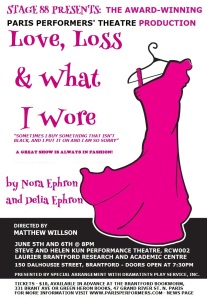 FROM THE THEATRE GROUP THAT BROUGHT YOU AUGUST: OSAGE COUNTY AND CALENDAR GIRLS (@ THE SANDERSON CENTRE)..

No one forgets their first love… Andrew Makepeace Ladd III wrote his first letter to Melissa Gardner to tell her she looked like a lost princess. They were both seven years old. For the next fifty years, through personal triumphs and despair, through wars and marriages and children and careers, they poured out the secrets of their hearts to each other. They defied a fate that schemed to keep them apart, and lived – through letters – for the one most meaningful thing, their undying love for each other.

TICKETS: $15 per person, $5 for Students (with Student ID). Available at door. (CASH only) 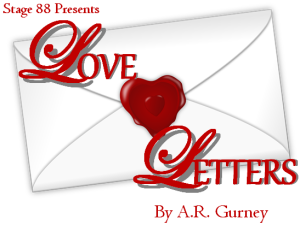